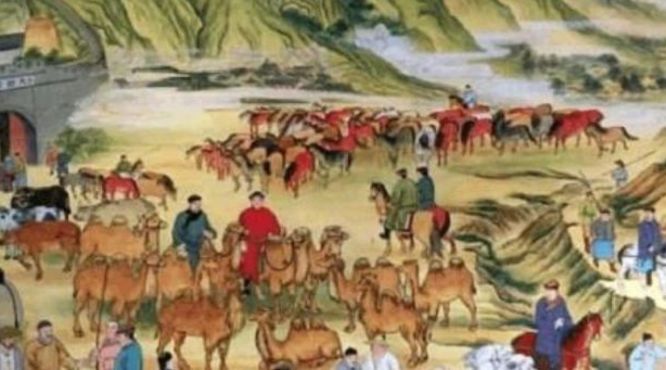 ZHU Yuanzhang (1328-1398), First Emperor of Ming Dynasty, came from a poor farmer family in late Yuan Dynasty. When he was a child, he pastured cattle for landlord. Afterwards, he became a monk begging for alms. After standing exposure, deprivation and hunger, he had deep feeling about the situation that common people were oppressed by government officials. After he became the emperor, he warned officials of all ranks and descriptions that when he was among the folk, he found that the government officials in prefectures and counties did not love people, but kept greedy and prurient. They were indifferent to the hardships of people, so he hated them to the utmost degree. Therefore, he set laws that officials would be severely punished if they corrupted and hurt common people.

Before Ming Dynasty, cake tea and loose tea coexisted. The tea brewing method that we usually adopt today originates from Ming Dynasty and promoter is ZHU Yuanzhang. According to Casual Literary Notes in Wanli Period, in the early of Ming Dynasty, the tribute of tea from each region followed the method in Song Dynasty, namely that the tea was made to be different shapes, which was also called as Longtuan. In September of 1391 (the 24th year of Hongwu), ZHU Yuanzhang thought that this method wasted the labor of common people, so he commanded to stop making Longtuan. On the contrary, he ordered to pay tribute of young tea leaves directly. Later, he abolished steaming and adopted frying. Through constant improvement, pan-fired production method was gradually perfect. Modern tea production craft is mostly developed on this basis. Natural loose tea is fresh and elegant with endless interest.

The promotion by ZHU Yuanzhang initiated the history of drinking tea in China. Objectively, he pushed the tea production method and tea drinking way in China to a new historic period. However, he even killed his son-in-low to ensure the fairness and purity of tea policy.

To prevent the disorder of mutual trade between tea and horses, the trade was hosted by the court without being interfered privately. However, some speculators and illegal officials ignored legal provisions and smuggled goods to make money. They secretly transported the tea out of the country and sol them to the minorities at high price. Meanwhile, they secretly transported horses to the country and sold them in mainland at high price.

The smuggled situation became more serious, so ZHU Yuanzhang was furious and commanded that smuggling action was prohibited. Those violating this command would be severely punished! Who do not know the severity of ZHU Yuanzhang? Who dare to play a trick of own life? Immediately after the command was released, the speculators and illegal officials were afraid and stopped violating the law. But OUYANG Lun, the son-in-law of ZHU Yuanzhang, still continued smuggled action. Others ceased all actions, so OUYANG Lun just wanted to seize this opportunity to expand business scope and make more profits.

As expected, when the command was released for less than two months, OUYANG Lun dispatched his steward ZHOU Bao to transport five carts of tea to sell in Lanzhou. He desired to transport war houses to mainland with earned money. Throughout the journey, all officials knew that it was transport team of emperor’s son-in-low and no one dared to impede, so the transport team went through without hindrance. Unexpectedly, when the transport team almost arrived the destination, it got into trouble on the bridge head of Yellow River Bridge in Lanzhou. The inferior officer guarding the bridge was a dedicated person being not fear of power. When the cart arrived, he promptly commanded to stop for examination. Soon, he found that the carts were full of private tea being forbidden to be transported, so he detained the transport team, submitted and waited for handling.

When ZHU Yuanzhang received memorial to the emperor, he knew that someone violated the command openly and sold private tea. After seeing carefully, he found that it was his son-in-law violated the command. He dispatched official to make survey, the memorial was proved to be true, which made him feel awkward. If he punished according to law, OUYANG Lun should be decapitated. If OUYANG Lun was dead, his daughter would become widow and her fate would be miserable. If he did not punish according to law, the laws and regulations of court would be useless. Then no one would enforce laws impartially and national people would not be convinced.

The laws in Ming Dynasty were famous for severity, and ZHU Yuanzhang enforced the law strictly despite the degree of intimacy. Besides, it could be also found that mutual trade between tea and horses was a national policy being extremely emphasized by court until Ming Dynasty.

PAN Cheng, from Jiaxing, Zhejiang. Deputy secretary general of Chinese International Promotion of Tea Culture Transmission Base, deputy director of Faculty of Tea Culture in Zhejiang Agriculture and Forestry University, deputy secretary general of Hangzhou Tea Brand Promotion Association, tea space designer, tea art curator and writer. His master is professor WANG Xufeng, tea culture scholar and winner of The 5th Mao Dun Literature Award, who devotes to research on tea literature and tea, artistic presentation of tea culture and international spread of tea culture. He once created large-scale artistic presentation of tea culture on stage Chinese Tea Ballad and acted as director of large-scale drama of tea culture Song with Six Admirations, etc. Besides, he has gone to many countries to give lectures and make communication about tea culture, including Italy, Serbia and Russia, etc.